Here is a preview of the interview  with NCNS glass artist France Grice, given to “Glass Art Association of Canada (GAAC)”, in January 2017.

GAAC: What was it that drew you to glass as your artistic material of choice? 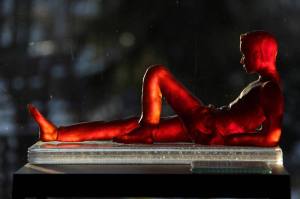 France Grice: A friend in Nancy, France’s mecca of early century 20th century pâte de verre, was doing fused glass since the 80’s. She was using mostly float glass and doing beautiful pieces using frit, thermoforming and sandblasting. I was hooked! In the early 90’s it was evident that Ottawa did not have the teaching capacity as it has now. I set up to learn on my own and, of course, a kiln was purchased. I bought books and did fused glass for a few years. Experimenting, failing, succeeding and with a kiln which had no programming, it was a big challenge.

GAAC: How much of a role has education played in your development with the material?
FG: My background is interior design. My glass making education is self-directed and on-going… Read more…