Posted on September 10, 2015 by mariasaracino

Last night, several members of the National Capital Network of Sculptors had the unique opportunity to sit in on an art talk called “Why Painting Now” featuring guest of honour, American artist Eric Fischl. This Contemporary Conversation Organized by the Embassy of the United States of America and hosted by the Canada Council Art Bank also featured a panel of Canadian contemporary artists.

Eric Fischl is hailed as one of the most influential figurative artists of the late 20th and early 21st centuries, Fischl is well-known for the way his work conveys psychological nuances that characterize the various stages of life.

In conjunction with the discussion, a life-size translucent cast acrylic version of Fischl’s iconic Tumbling Woman sculpture will be temporarily displayed at the National Gallery from 4 – 14 September, and then at the U.S. Embassy until 23 October. Expressing the vulnerability of the human body, Tumbling Woman was first created in response to the events of 9/11, as explored further in thisNGC Magazine profile. 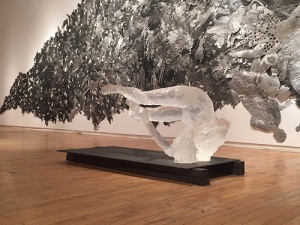 Afterwards we had a chance to see some of the work collected at the Canada Council Art Bank and came across the work of one of our own members Edna Lemyre. 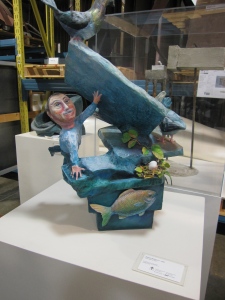 Figurative Artist
View all posts by mariasaracino →
This entry was posted in Miscellaneous. Bookmark the permalink.