Did you notice new sculptures in the city? … PAUSE for the Public Art ….

Did you notice new sculptures in the city?

Until October 2016, you are invited to “PAUSE –  for a public art break” and admire sculptures ZOOM! V2  and Il/Ell n’a pas de nom from Canadian artists Marc-Antoine Côté and Randall Anderson on the south side of the Alexandra Bridge in Ottawa (across from the National Gallery of Canada). 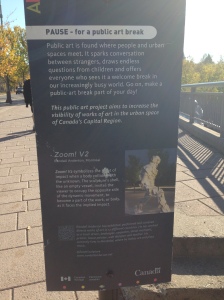 “A lot of my work deals with ideas of movement and encounters with information,” Anderson says. In Zoom!, that’s shown by depicting paper shapes colliding with a form, causing the body to disappear. 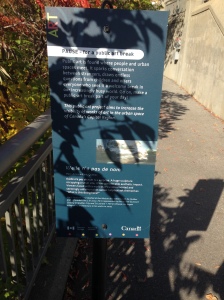 Coté says his work “provokes questions about the place of sculpture in urban space.” Because of its size — it’s nearly four metres tall and almost as wide and will occupy most of its small plaza — it will surprise those who encounter it, he says.