Artist of the Month

Every month we will be recognizing and celebrating an artist from the National Capital Network of Sculptors. Learn more about your favourite artists’ methods, inspiration, creative process and more. This month’s featured artist is Danny Barber. 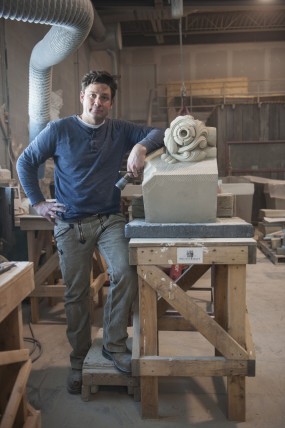 Step into Barber – Carving & Sculpture Inc.  studio on Triole Street in Ottawa and be prepared to be awed.  From the time you enter the door and take in the sculptures that have been created within its walls to the workroom with its full complement of tools and workspace, you can imagine being immersed in the art of stone carving.  There are pieces which represent the various types of classes currently on offer at the studio, some art sculptures, a beautiful fireplace surround and hearth created out of stone, as well as some replicas of work which was done on the Canadian Parliament Buildings.  And one very special sculpture, which led the studio owner to this destination, sits in a corner of the gallery portion of the studio, in its full glory.

Danny Barber, the name behind the company, was born and raised in St. Catharines, Ontario.  His was not a typical upbringing in that it was multifaceted.  While always interested in art, he did not follow an artistic curriculum during his school years.  However, his creative interest and the discipline which would serve him well in his later years was developed through various activities that he was involved in during his teens.  For example, he was a member of both the Provincial and National Boxing teams which required dedication, stamina and focus; he played in many bands in the St. Catharines area for a number of years, with the focus being on song writing and original music.  He was also introduced to various aspects of stone carving by working at his family’s monument business during his teens and into his early thirties.

While he enjoyed these outlets for his creative energy, he felt that he needed to spread his wings and look further for other opportunities in the arts world.  As a result, he attended Sheridan College for two years where he immersed himself in weekly life drawing classes.  This interlude opened up to him the possibilities for learning and for developing forms of expression to which he had not yet been exposed.  At the end of this period, his father challenged him to carve a 36’’ tall dragon in granite from a 6’’ tall model that he had found.  Danny took on the challenge and was successful.  That dragon is now proudly displayed in the gallery portion of the studio.  This signified a turning point for Danny as it was when he decided that he definitely wanted to continue to pursue the art of stone carving, albeit at a different level and in a different direction than he had taken in the past.

In early 2002, Danny made the bold choice of moving to England, where he enrolled in an architectural stone carving and conservation course.  This was followed up by a three-year apprenticeship with an architectural stone carving company in Gloucestershire England.  Danny offers that this experience taught him a way of thinking that is always present in his work.  It provided him with an understanding of the best tools to use for a specific task and methods of problem solving that are always extremely useful.  Most importantly, he says, it taught him how to strive for and achieve a high level of quality in his work and imbued him with the knowledge that the project is not complete until that level of quality has been met.

Upon his return to Canada, Danny worked on a number of rehabilitation projects including the Mappin Wing at Rideau Hall and the East and West Blocks on Parliament Hill.  In 2012, he teamed up with friend and fellow carver, John-Philippe Smith and co-founded Smith & Barber – Sculpture Atelier Inc.  Together, they put together a team of highly skilled carvers and were responsible for providing all of the replacement stones for the rehabilitation of the entire West Block on Parliament Hill.

He has recently moved on to follow his own unique path and to continue on his stone carving journey.  In 2018, he created Barber – Carving & Sculpture Inc. which allows him to focus on his personal development in the art and craft of stone carving.  The experience he has gained from the many years of architectural restoration is a definite influence on the ideas and techniques that he is using in his current work.  However, he says that, while he can’t help be influenced by this experience, his aim is to further develop his thinking and style and to take it to a place that is more original, with a view to developing a style signature of his own.  He will continue to develop his skills and will spend more time carving projects for himself.  His goal is to have his gallery be a destination for people looking for original artwork.

In 2009 Danny established the Canadian Stone Carving Festival which will take place on the Sparks Street Mall in Ottawa July 19-21 this year.  The Festival was created as a means of building a craft and social fellowship among stone carvers in the National Capital region which did not exist at the time.  It was important that it be a Festival, not a competition, so that experience level was not a factor but, rather, the emphasis was on bringing together a community of people where they could all do something they love together.  Everyone is welcome; younger or less experienced craft people can work alongside those with more experience to learn and be inspired.  It was also important to build public awareness of the craft of stone carving.  The theme of this year’s Festival is “Comic Book Heroes and Tales and Legends of Canada”.  Visitors to the event will see 30+ stone carvers from Canada, the U.S. and Europe working very hard to complete their projects.  It will provide attendees a glimpse into what a historical construction site may have been like.  Using hand tools (chisels, mallets, etc.) only, participants will have 20 hours over the course of three days to complete their pieces.  On the afternoon of the last day, all pieces will be auctioned off to the public, with proceeds being donated to charity.  To date, the Festival has raised over $65,000 for various charities. https://canadianstonecarvingfestival.com/

Danny has some advice for those who may wish to pursue a hobby or career in stone carving.  Starting with softer stones such as soapstone will allow one to achieve results without getting discouraged.  He also opines that taking a course is a good idea before buying too many tools, as a course will educate the carver on what tools to look for and how they are used.  For those who wish to break into stone carving as a career opportunity, he feels that taking a program overseas, where there is a long tradition in the craft, is a very good idea.  For those who may want to try a few courses out here in Ottawa, Barber – Carving & Sculpting Inc. offers a number of courses, including those in architectural ornamentation, soapstone carving and clay modelling and it will soon be adding a slate carving course to its offerings.  Information on the various courses can be found at https://barberstonecarving.com/courses/

I, for one, look forward to seeing what comes out of the Barber – Carving & Sculpture Inc. studio in the years to come.

If you would like more information on the NCNS Artist of the Month feature, or you would like to nominate an artist, please contact Mary Lou Devine at maryloudevine@gmail.com

1 Response to Artist of the Month