Posted on November 8, 2019 by mariasaracino 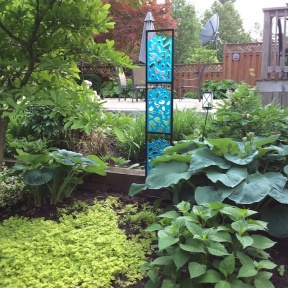 Driving up to our next artist’s home/studio, I was struck by the beautiful colours, both in her front yard and on her door, where there is a beautiful glass panel which welcomes visitors to her world.  I was further impressed by the interior of the house which is artfully decorated and incorporates a number of both her and others’ works.   As a long time member of the National Capital Network of Sculptors and its former president, it was a pleasure to interview her.

France Grice is a glass artist of a type which is rarely seen in the Ottawa area.  She has taken the art of glass fusion beyond what is typically found at art shows and her pieces are a marvel to see and experience. 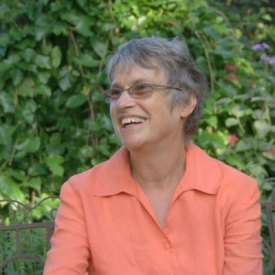 France came to Montreal, Canada from France in 1966 to start a new life.  She stayed in Montreal for a year, then headed to Toronto to learn English.  She returned to Montreal, then moved to Nova Scotia before finally settling in Ottawa in 1972.  She is still in the home she purchased at that time and has created a fully equipped glass studio in her basement.  She is surrounded by beauty, both inside and outside of her home.  Her backyard surely provides inspiration as it is deep and masterfully planted.  There is a calm-inducing pond within eyesight and the beauty extends the full length of the property.  The vibrant fall colours that were evident when I visited would, I am sure, pale in comparison to the yard when seen in its full summer glory.  France has created this beauty, this “safe place” which allows her to contemplate life and to create her extraordinary pieces.

Her road to full time artist was peppered with various occupations, including Interior Designer, and working at the National Gallery, where she was involved with the Canadian Gallery, preparing for the move of the artwork to its present location and assisting the curator with installing those works, including the silver collection and the Group of Seven paintings, in the new building.

As many of us have in our various chosen mediums, France got her start in glass after being introduced to it by a friend who was working as a contemporary glass artist in Nancy, France.  At the turn of the 20th century, Nancy was a major center of the Art Nouveau movement and is known for its museums which house, among other pieces of art, the works of glass artists Émile Gallé, Jean Daum and his sons, August and Antonin, who founded a crystal studio and manufacturing operation which still exists to this day.

Grice says tha when she started working with glass in the mid 1990’s, there were virtually no artists offering classes as there are now.  So, she taught herself – through books (which were also very limited) and experimentation.  She bought herself a 24” diameter kiln with a pyrometer (a type of remote-sensing thermometer used to measure the temperature of a surface) and started experimenting.  In her early days, she used a fair amount of float (sheet) glass and produced functional pieces such as platters, candle holders, etc.  Because of her interior design work, she also created and produced other functional and artistic pieces such as sinks, decorative panels and lighting fixtures.  As a result of her other passion, which is gardening, she was naturally drawn to making items for an outdoor setting and her yard and others’ were soon populated with beautiful bird baths, outdoor panels and exterior lighting. 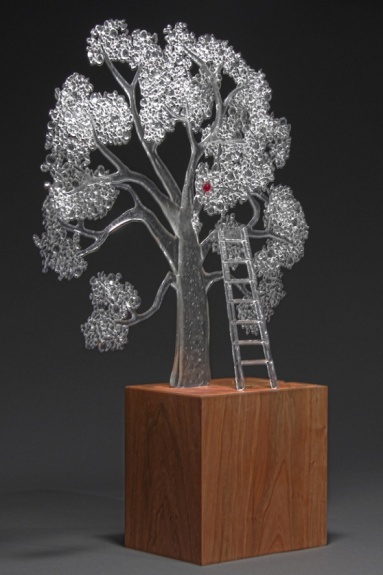 On her journey towards expanding her knowledge and experience in working with glass, Grice took a class in påte de verre, or glass casting, under the direction of Donald Robertson in Montreal.  As often happens, she was hooked on this new technique but then realized that she had to learn how to sculpt.  This led to attendance at the Ottawa School of Art where she took both clay modelling and mold making classes with Dawn Dale and David Clendening, respectively.  She now works in both figurative glass casting, which is quite a complex process, and in glass fusing whereby she creates some truly unique and fantastic pieces.  Her tree series is one of these.  Grice refers to these as tree spirits as they are always done in clear glass.  Of particular beauty is a piece which I viewed at her home which consists of a single apple tree, its branches spread and leaves artfully represented, with a ladder leaning against it in hopes of the climber being able to reach the single red apple which dangles there, ripe for the picking. 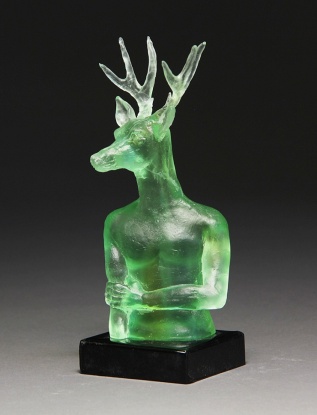 Her figurative work is mainly an organic process, coming from her subconscious or distant memories.  When she begins her process, she knows that it will be male or female, sitting or standing, but not much more than that.  It is an evolutionary process which develops during the creative period.  I saw a number of fantastic pieces at her home, some of which cause one to wonder how she has managed to do what she has done.  An example is a figure which is encased in glass, with each side of the body protruding from each side of the glass.  Last year she started a series called “hominus Animalibus” wherein she has produced a number of anthromorphic pieces, with more to come – perhaps a ram, maybe a horse…we look forward to seeing what will emerge.

While in the past she has designed frames and bases in metal, she has not experimented much with other media as she has been fully concentrated on developing and perfecting her glass processes.  However, she has recently started experimenting with polymer clay, with a view to finding ways to incorporate glass into that process.  She says that this is just starting to morph.  Regardless, while visiting her home studio, I was quite impressed with a raven perched on a glass stand and a turtle sprouting glass flowers from its shell, both of which had recently been completed and which were on view as pieces of art.  I can’t wait until the metamorphosis has been fully completed as I know that we can expect to see more and different ways in which Grice will surprise us with her glass works.

As with many of the other artists whom I have interviewed, France is most excited by the birth of new ideas, even if they don’t always work.  She finds that this aspect of the work gets the creative juices flowing.  She is less enamoured with the uncertainty which comes with custom work for interiors.  It is always a question as to whether the client will like the final product and if it meets their idea of what was contemplated.  And, of course, the process of measuring, and measuring again to make sure that the piece will fit within the space for which it is intended.

Her studio is divided into two distinct areas – the “clean” studio and the “messy” studio.  The first is used mostly for fusing preparation, cutting and assembling the glass.  In the “messy” studio (which really isn’t that messy at all, in my opinion), she makes her rubber molds, steams the wax and makes refractory molds, all of which is part of her processes.  Her kilns (she has two) are also located in this area.  I had the privilege of peeking into one of them to see a beautiful blue tree currently in the process of being prepared for fusion.  In the summer, as it is too hot to fire the kiln, she occupies herself with producing the original clay figures which will eventually be replicated in glass or foregoes working with her glass process completely, as she finds herself immersed in tending to her extensive gardens.

When asked where she could see her work going in the future, Grice replied that, while she started her glass journey designing functional design pieces, over time things have evolved, resulting in a more artistic dialogue with an inner voice taking place, a dialogue which has not yet quieted.

Unlike when she started working with glass, there are now a number of classes in the Ottawa area teaching the fused glass process.  However, there are not many which offer classes in glass casting.  She offers such classes at her home studio, for both beginner and intermediate casters.  Those interested can view her beautiful creations and obtain more information on her workshops through her website at http://www.francegrice.com.

Grice’s work can be seen at The Westend Gallery Ltd. In both Victoria, BC and Edmonton, Alta.  Closer to home, you will be able to see some of her tree work at the Baz’Art at the Shenkman Centre in November.